What's on this page? A rant about fees charged without agreement by the UK Post Office ("Parcelforce") - What can we do? - The wider problem

July 2021: A rant from 2009 on exhorbitant charges by the UK Post Office; much has changed, but this is a Europe-wide problem which is not going away. Ironically, Brexit means that the same now applies to UK purchases from the EU. 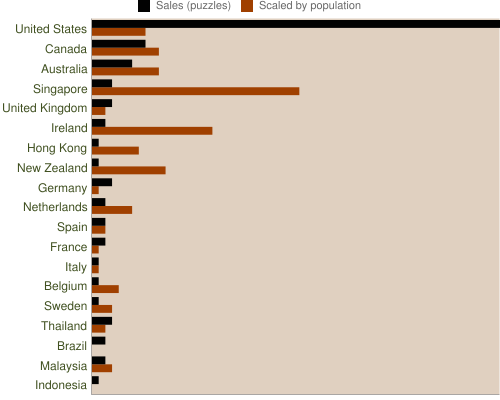 Puzzle sales by country for the first half of 2009

We still don't have any automatic collection of sales statistics, so the chart above (courtesy Google Charts API) is based on some manually extracted, and somewhat approximate, counts of sales. You'll see immediately from the black bars that the USA is easily our best-selling country, followed by Canada and Australia. The list has English-speaking countries grouped at the top, followed by the rest of Europe, then the rest of the World. (These are not all the countries: we also had a handful of sales to fourteen other countries, in Europe, Asia, and the Americas.)

When we look at the figures scaled by population, the US, Canada and Australia look remarkably similar; Singapore is something of an anomaly, but it's a city state, after all. But where is the UK? We actually sold more puzzles to the city of Singapore than to the whole of Britain, leaving the sales per population of the UK around 25% of the English-speaking average. Why could this be? England was the birthplace of the jigsaw-puzzle; I'm British myself, so I can hardly be writing in a difficult-to-understand version of English...

We had a couple of packages returned recently -- a present from someone in the UK to a friend or relative. We sent the order by SAL, and our customer reported that it had not arrived, so we sent a replacement, using EMS to be certain of delivery. Both packages eventually returned, the SAL marked "not collected", the EMS similarly, but there's a bill pasted to it for £7.05 VAT plus £13.50 (!) "handling charge". That's £20.55 in tax costs, for an item that cost a total of 4200 yen (including SAL), which in March was about £30.00. Notoriously, Brazil and other S. American countries can charge 50% duty rates -- the UK customer can end up paying more than 60% surcharge on the cost of an item.

A bit of web-searching makes it all too clear that this outrageous "handling charge" is a well-known problem, which seems to have created a climate of fear, in which people are unwilling to risk buying anything over the Internet from outside the EU. Everyone knows someone who got stung for twenty quid for an item for which they had paid hardly any more. I couldn't find any obvious cases of people complaining about paying the VAT itself, which is as fair as any other tax — just about the "handling-charge" rip-off.

The key to all this is the magic figure of eighteen pounds: for commercial items, goods with an "intrinsic value" (this seems to mean the value of the item(s) excluding postage and packing charges) not exceeding £18 are not subjected to charges. Even though our UK sales have always been proportionately very low, from the feedback we have had it seems even larger packages (two 1000-piece puzzles, way over £18) were generally escaping the "handling charge", but anecdotal evidence suggests that more recently nothing has been escaping.

Of course we are battling with the high yen exchange rate, which has made the problem much worse. Consider a typical art puzzle, with a retail price of 3000 yen: here's what would have happened a couple of years ago (when the pound was at a peak) and what happens now.

* The VAT amount is approximate, since small packets only carry a declaration of the "intrinsic value". They probably add up the stamps, which will typically be slightly less than our "shipping charge", to allow for the cost of the PayPal transfer.

So despite our 10% discount, you could end up paying well over twice as much as a couple of years ago.

What can we do about it?

Two things. First, as long as we possibly can (provided the yen doesn't rise even further again), we will offer puzzles to UK customers with prices in sterling, and with the price of a 1000-piece puzzle (or equivalent small-piece puzzle of 1500/2000 pieces) capped at £17.99. As long as you order one puzzle at a time, there should be no VAT or "handling charges". It will take a while to implement this in software, so for the time being we'll offer this manually.

We just can't offer (full-size) 2000-piece puzzles for this price, but fortunately there is a second option: you can clear the package through customs yourself. This involves sending the payment direct to Customs, and is no doubt troublesome, but if you don't think the job is worth £8 we will help as much as we can.

It's clear from a quick bit of web searching that there is widespread outrage about this. It is plainly dishonest of Parcelforce to take recipients as captive customers, and charge a fee that has not been agreed, particularly since it is not in fact necessary if you do the clearance yourself. For us it's really a huge problem — just look at those sales figures again.

The HMRC website is quite helpful, if unsympathetic to purchasers of small items from honest businesses: apparently the £18 limit is a EU directive, and customs are not "able" to waive a payment of a couple of pounds of VAT, so it's just unfortunate that Parcelforce get to rip you off for £8.

At the same time there is another problem, said to be losing the government £200 million in lost revenue. This is the "Channel Islands dodge" — if you buy something in the UK from a large online retailer in the UK, and the total comes to under £18, they will offer to sell it to you from Jersey or Guernsey (ah! childhood holidays...), and you can perfectly legally avoid paying the VAT on it. Of course this hurts small online retailers just like us, but in the UK, who do not have the scale economies to send things to the Channel Islands and back for nothing. There's quite a lot of outrage in this area too.

Of course the fundamental problem is that all of these rules and regulations were dreamt up by people whose techonogical grasp is somewhere late in the 19th century. The world has changed, and international retail is a reality which will not go away. There is a blindingly simple answer to both problems: the Channel Islands loophole ("loop" is oddly appropriate for once!) and the "handling charge" rip-off. Customs have to discover that with a sensible technological approach, they could collect amounts of VAT down to about a pound, scrap the £18, and scrap any third-party "profiteering" by Parcelforce. For example, it would be quite trivial for us to supply the customs declaration as a barcode, which would make the "analysis" stage of the operation take as long as a supermarket checkout.

Well, for the time being, we will concentrate on being under £18...