"Not the shop!" (Editorial) 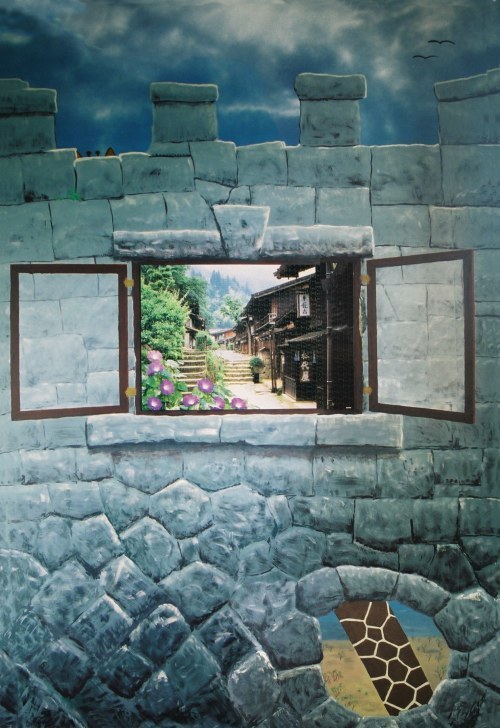 One wall of the stairwell in our house. The puzzle is Tsumago - rather a nice view from our "window"! (This is a reconstruction of almost the whole wall, from three separate images.)

Sometime late in 2003, it came to my attention that the two walls of the stairway of our house, which we had painted in a nice contrasting dark grey-blue, to set off the humdrum ivory of the other walls, had faded horribly. Somehow or other, a few neurons collaborated, and an Idea was born! I'd display a completed puzzle or two on the wall, and I would save the expense involved in buying a frame. In any case, I wanted to try gluing a puzzle some time, since I had never done it, and felt a bit guilty giving other people instructions on what to do with the glue and the mystery object*.

* The mystery object... see the details of Yanoman puzzle contents. Number 6 is the "mystery object", which further down you'll notice I've mentioned again: spread [the glue] out carefully with the mystery object. And still people keep writing to tell me what the mystery object is. (Confession: at some stage, I inadvertently edited the description so that it said sponge instead of mystery object. I've corrected it back, and you are all forgiven.)

I had in fact tried gluing a puzzle using the supplied glue, and the method described in the instructions. I found it not easy to get a good result: it's the sort of operation you have to do in one go, and it doesn't seem to be easy to patch up defects later on. So I decided to use an entirely different method. Basically, I turned the puzzle over, applied glue, and stuck on a backing sheet of heavy kraft art paper.

This isn't trivial, either! Here's the first mistake I made (actually while trying it out with the first puzzle that I had already glued from the front): I put the puzzle face down on some newspaper, on the table. Then I applied spray glue (the sort paper layout artists use) all over the back. Then I carefully applied the sheet of backing paper. Unfortunately, I forgot that during this process the puzzle would move on the table, and the spray glue that had just missed the puzzle was on the newspaper that the front of the puzzle had just slid onto. Urgh! So here's the revised and successful procedure...

This gives you a glued-together version of the puzzle, leaving the front surface in its original condition. It is now relatively easy to glue the puzzle to the wall (or to any other backing, of course). And if it does come off the wall for any reason, it will do so in one piece, so you can mount it somewhere else.

But first, of course, you paint the wall, appropriately! 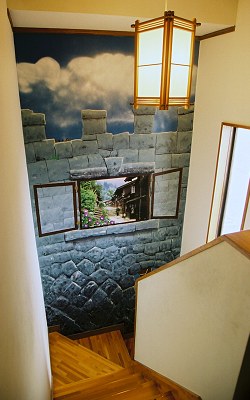 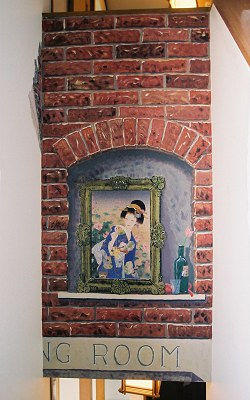 A trompe l'oeuil seemed the obvious ploy - to give a completely new outlook from our house. Or indeed, how better to hang a painting on the wall than by painting on the wall. I finished the castle wall in late 2003, and for a while we looked out into the courtyard of Hōnen-in, but unfortunately that puzzle was overcome by the extremes of humidity we are prone to here in the summer, and detached itself from the wall while I was in England (2004). So on my return in September, first I painted the opposite wall, then finished off with two new puzzles.

The "framed" painting is Sparkler, one of Haruyo's beauties, but long discontinued. I had just been visiting one or two old houses in England, where the favourite pastime is stripping off old plaster from the walls, and I painted what I imagined this might reveal - brickwork, old plaster, a curious engraved lintel...

Oh, yes. I made the lampshades as well, a decade or three ago.